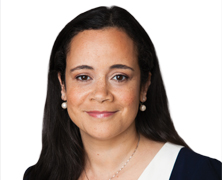 To let my priorities guide me.

My Beloved World, by Sonia Sotomayor.

I grew up in various parts of the world and was raised in an Arabic-speaking home by Egyptian parents. I was educated under the French system, and quickly developed a strong affinity for the French culture and language.

When I graduated high school from the Lycée Français in Cairo, my parents were keen on switching me to an English-language university. At that time, I learned that the Sorbonne University was about to open a branch in Cairo. Against the will of my parents (who were concerned about the viability of this new program), I registered to study law in the new school. Law was the only discipline that was offered in French, so I picked it!

After two wonderful years, I was offered a scholarship by the French government to continue my studies at the Sorbonne in France. There, I specialized in private international law and was hoping to start practicing as avocat in Paris. But again, life took a new turn when I was awarded a scholarship to pursue an LLM in the U.S.

Like many other LLM earners who complete one year in the U.S., I tried to find work experience in a U.S. law firm before returning back home. I started my career as a litigator at a large firm in Los Angeles and quickly realized that I was in the U.S. for the distant future.

The practice of law in this country is incredibly rewarding, and as cliché as this may sound, I felt (and still do today) that the United States is a country where everything is possible. I worked hard to overcome obstacles, including improving my English language skills, taking two states’ bar exams, and learning to litigate American-style. With some effort and time, and a move to New York City via London, I specialized in the field I always wanted to be in: international arbitration.

Throughout those years, I have learned to embrace my difference and refuse to let it impede me. My diverse background and world experiences gave me the tools I needed to adapt to almost any given situation. I have also learned the importance of taking risks and not overthinking career goals. Today, I spend countless hours mentoring younger foreign practitioners, and I am immensely proud every time I leave one of my mentees feeling as if they too can have a successful career at a U.S. law firm. I am even more proud to see that the landscape of law firms, and in particular, of their senior ranks, is changing. I see more diverse partners, women and men, having various ethnic, legal, and cultural backgrounds. Let us hope that this trend will continue, and that the U.S. legal industry will capitalize on the incredible wealth of talent that comes each year anew.

Education has definitely shaped my career. My classes at the Sorbonne were focused on the philosophy and theory of the law, rather than on the practice. We were also taught how to synthetize and structure our legal arguments. What I learned was instrumental in shaping me into the lawyer and thinker I am today.