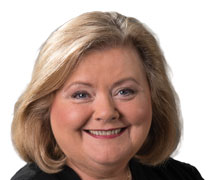 You can achieve anything you want, if you only put your mind to it.

Worker in a fish industry plant

I was the first in my family to go to university. My home country, Iceland, is very small in terms of population and in those days to achieve a master’s in pharmacy one had to go abroad. However, I returned with my degree and took up my first job as a pharmacist with a local wholesaler. Some 30 years on, I still love my work and am proud to head up strategic projects for Actavis.

Here in Iceland, as with many of the Nordic countries, it is very much the norm for women to go to work. For centuries, women have played an equal role in terms of working the land and building the economy, partly from necessity and also because it is ingrained in our culture. If you look at our parliament, where 40 percent of the members are women, and local government, where the percentage is even higher, you could say we have equality. If you look at Actavis in Iceland, you’ll see a workforce that is 60 percent female and a management ratio at an equal level. Obviously that’s encouraging, but we still have some way to go.

I think evolution is a lengthy process. Forty years ago there were less women studying for higher qualifications than men. It has taken time for that gap to close and I believe the gap between men and women in leadership roles will diminish accordingly in the future. In the meantime, there are things we can do. In Iceland, for example, new legislation coming into effect next year will require a minimum of 40 percent of each gender to be represented at board level, an area which seems to be the most conservative in terms of change.

More needs to be done to create a decent infrastructure that will make it possible to pursue a career and have a family. Investing in affordable childcare is one issue, and yet there are many other initiatives needed. The Nordic countries have some of the best levels of parental leave, for example, offering the choice for both mothers and fathers to take time out to nurture their families. It is really about embracing diversity, and hopefully Actavis and other global companies with a heritage of fairness and equality can help to influence that change.