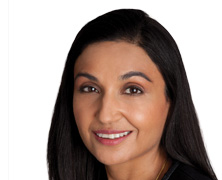 To be the best at everything I do and empower others to do the same.

As a mother of two young sons, education is one of the most important issues my husband and I focus on for our family. We actively encourage our sons to participate in a variety of STEM activities, including an after-school club called Math Olympiad. What I recently witnessed firsthand in their Math Olympiad club was a dramatic replay of what I saw myself as a child and what appears to still be happening decades later in classrooms across the nation. Less than one-quarter of their club is girls and the “superstars” seem to be predominantly boys.

Our solution: Next year, I will co-teach the club and hope to raise these numbers by showing the girls how to love math and helping them build confidence and believe they too belong in the class and can be the “superstars.”

When I look at my own life, my mother was the first woman from her village in India to obtain a college degree in science and went on to become one of the first female chemistry college professors in her home state. I was born into a world where women were supposed to excel at science and math, and I always knew that I belonged in that world and was confident I would succeed. When it was time for me to choose an undergraduate college major, it was natural for me to choose chemical engineering. Conveying that sense of belonging and conviction of success are critical elements to encouraging young girls to enter into STEM fields.

One key change I would like to see is a recasting of our educational content for young girls on STEM subjects to be more oriented towards girls’ interests. A good example of this is the computer program ALICE, developed at Carnegie Mellon, which teaches students visually-oriented programming by allowing them to manipulate and control characters and learn the basics of programming through creating stories for their characters, as opposed to simply creating lines of code. Studies by the National Science Foundation have shown that ALICE improves retention and performance particularly by women at the college level.

The advancement of women in STEM fields is both a women’s issue and a national priority. Women becoming equally represented in STEM fields could dramatically increase the nation’s declining representation in these areas. I believe this change starts early—for example, changing the composition of clubs like my sons’ to comprise an equal number of girls and boys and convey the sense to young girls that STEM subjects are a natural place for girls to succeed. By making these small changes now, I hope that we will see greater numbers of women succeeding in STEM fields in the future.