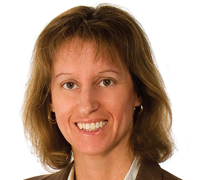 Bachelor’s in mechanical engineering, University of Minnesota institute of Technology; master’s in management and JD from Northwestern University, J.L. Kellogg Graduate School and School of Law

Be prepared, be smart about your decisions, and be true to yourself. Success will follow, and you will enjoy the journey.

Sandra Magsamen’s When I Grow Up I Want to be Me, to my daughter

When most people think about mergers and acquisitions (M&A), they correctly consider it a career dominated by men. I am almost always the lone woman at the table throughout negotiations. But I don’t think about that. Truth be told, I sometimes forget I am the only woman, until someone reminds me. I just think about doing the best job.

That’s not to say I haven’t used gender to my advantage on occasion. As one of the rare women in the investment banking M&A field, people often remember me, especially prospective clients. In a crowd of male competitors, I learned that what I said would also stand out. On one occasion, after a particularly stressful, but successful, negotiation session, at which I was visibly pregnant, my client indicated that he now had new criteria for his M&A advisor—she needed to be in her third trimester.

Fast-forward to my current position at Ecolab, where I lead a team responsible for the company’s global mergers and acquisitions. we spend our time managing the entire acquisition and financial evaluation processes, from prospecting and investigation, through due diligence and negotiation, all the way to closing. In the past, a man with an all-male team always led this job. By taking on this role, I’ve shown that this position is really about talent and ability, not gender. In fact, during my short tenure I have pursued the most qualified candidates for the team, a practice that has yielded two additional female hires.

I’ve been asked to speak before a women’s affinity group later this year about using negotiation and communication skills as career development tools. Obviously these are central to my work activities, and I agree that these skills are important as we use them every day at work and at home. However, I believe that effective negotiation and communication are based on two much more basic skill sets: being prepared and knowing yourself.

Being prepared is about researching the facts, developing your justifications, and understanding the possible choices and interpretations, including how others may view your decisions. Knowing yourself, on the other hand, is about identifying what you want and how to leverage your strengths to get it, while being honest with yourself and authentic in your behavior. If you keep those two things in mind, success at work and in life will follow.