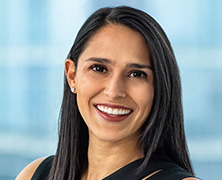 “If the wind won’t serve, take to the oars.” –Latin Proverb

The Boys in the Boat by Daniel James Brown

Server at a restaurant

Inspired to Serve the Public Interest

I was born in Mexico and grew up in a Texas border town in the Rio Grande Valley. The area is majority Latino and, at the time, was largely underserved and underprivileged. My childhood in the Valley inspired my desire to protect and advance access to justice.

I attended Harvard College, and, after my first year, traveled back to the Valley to shadow a federal judge in his courtroom. Judge Ricardo Hinojosa, Chief Judge of the U.S. District Court for the Southern District of Texas, was the first Latino to ever be appointed to this position. After spending a summer with him and his team in chambers, I was inspired by his hard work, fairness, and commitment to community service. The experience was pivotal in my life and further fueled my drive to attend law school and serve the public interest.

After graduating from Harvard Law School, I began my career as a law clerk on the D.C. Circuit before joining the Washington, D.C. office of Gibson, Dunn & Crutcher to gain litigation experience. I then served as senior counsel to Senator John Cornyn and eventually, joined the White House Domestic Policy Council as special assistant to the President for legal policy and regulatory reform. In that role, I managed the development of national policy through Policy Coordination Committees by synthesizing the recommendations of a range of federal agencies, including the Departments of State, Labor, and Justice. I later served as an advisor to the White House Counsel before returning to my home state.

While working with states, I witnessed the sobering effect that COVID had on their resources and their ability to bring resource-intensive, high-stakes litigation. That motivated me to join a plaintiff-side law firm, Keller Postman, to find a way to serve public entities from the private side. To that end, I spearheaded the launch of the Keller Postman’s Public Institutions practice. Since then, we have represented several states and municipalities in significant national litigation, standing up against the largest corporations in the world, to curb unlawful conduct directed at the residents of those states. It has been an honor to find a way to continue working in the public interest by partnering with public institutions in this vital capacity.