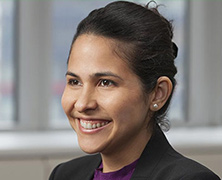 It doesn’t get easier, you get stronger.

Of Women and Salt by Gabriela Garcia

My Story Is All about Opportunity

I grew up with my parents constantly reminding me that my greatest opportunity was being born in America. It was only years later that I could truly appreciate the values instilled in me growing up in a classic immigrant household. These values, coupled with the opportunity I was given, powerfully shaped who I am.

My mom arrived in this country as a political refugee from Cuba, with only the clothes on her back. My mother never graduated from college, working as a school bus driver to support her family, instead of pursuing higher education. My dad left a tumultuous political situation in Peru where his life was in danger, and entered the United States on a student visa. He later enlisted in the army and fought in the Vietnam War, thereby gaining U.S. residency. They sacrificed everything for a better life in the United States, and they told their children to make the most of every opportunity the country had to offer.

I knew I had a duty to honor the opportunities that my parents had given me. College had been out of reach for them, but they wanted college for their kids. So when I went, I pushed myself in every way I could and I got straight A’s.

In addition to my parents having instilled the value of hard work in me early on, it was just part of my character to constantly push. Growing up, I was always questioning, especially my grandfather, with whom I spoke extensively about the revolution and the rule of law in Cuba. I was opinionated and outspoken. I pushed. When I was eight, my grandfather declared, “You like to argue. You stand for your principles. You care about justice. You’re going to be lawyer.” I didn’t even know what a lawyer was.

But he was right. A career as a lawyer turned out to be the perfect blend of my desire to take advantage of all the opportunity I was given, my interest in fairness and principle, and my natural inclination to always push forward.

Today, I work with emerging companies, financial institutions, and investment managers on complex regulatory challenges in the development of bespoke financial digital asset technologies, and on domestic and cross-border cutting-edge fintech initiatives in the derivatives markets. It’s a relatively new area of law that is dynamic and largely uncharted. I also use my legal skills on a pro bono basis to help those in the same position as my parents and grandparents—those seeking opportunity and safety in America—to achieve it.

In all of this legal work, the core qualities that motivate me come into play—the desire to embrace opportunity, the need to establish and argue for key principles, and the drive to always push forward.