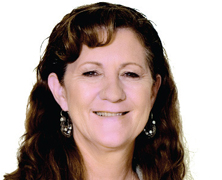 My children and their endeavors, which include competitive horseback riding and tennis; antique collecting; gardening; and cooking

In work and life, do the things you are passionate about and don’t try to be something you are not.

Under My Skin: Volume One of My Autobiography, to 1949, by Doris Lessing

To reach corporate America’s highest ranks, women must leverage their special skills to succeed and to help change the existing gender dynamics for the future. After all, the pathways to the top were created by men and, therefore, often call for the traits more typical of men. That’s why it’s critical for women to develop skills such as analytical thinking and problem solving, while also embracing creativity and intuition.

I also advise ambitious young women to build careers in meritocracies, environments where accomplishment and hard work are the basis on which they are measured and promoted. I was fortunate to begin my professional life at McKinsey & Company, where I was able to distinguish myself through achievements and work ethic. As a result, I had some very talented senior people become my mentors who’ve proven strong advocates throughout my career.

Admittedly, I am a relentless optimist. I focus on the positive and never give up. I inherited my perseverance from my father, a hard-working, self-made man. He was a PhD chemist and ran a research lab, putting in incredibly long hours, while building our family house himself. Such a role model inspired me to swim upstream through the male-oriented corridors of power, which I am deeply committed to changing. That’s why I recently spearheaded the launch of the Executive Women’s Initiative at MasterCard Worldwide, where the need to promote diversity and elevate the number of women in the leadership pipeline is a business imperative.

We launched the initiative in September 2007, bringing together 60 MasterCard women executives with our CEO and senior leadership team. The goal: Take best practices and build a program that converts frustration into a game plan. We are now planning a second Executive Women’s summit for fall 2008, and the number of executive women has grown to 72. While we want to generate enthusiasm about the initiatives we have implemented and the progress made to date, we’ve only just begun, and we will continue to build the framework for the future.

In the meantime, I take every opportunity to reach into the organization and help develop promising young women. When I see a bright light, I try to find ways to promote that future star’s visibility and offer guidance, as my mentors did for me. I believe that nurturing talented leaders is a responsibility all of us share.