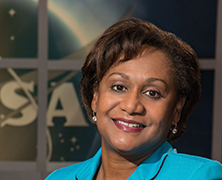 As Director of Exploration Integration and Science for the NASA Johnson Space Center in Houston, Vanessa Ellerbe Wyche leads human space exploration initiatives that will take us further into the solar system.

The 28-year NASA veteran describes her job as a dream come true. The opportunity to learn ‘what’s out there’ connects her to NASA’s mission to put humans on the surface of Mars. In her career, Wyche has developed space flight hardware, supported training and data collection on astronauts – before, during and after flight – and held positions in which she was responsible for the development and integration of hardware and systems, including ensuring astronauts were trained for research missions which assembled the International Space Station.

Wyche has been in many leadership roles while at NASA, including Flight Manager for several missions in the now-retired Space Shuttle Program, and Director of Operations and Test Integration in the former Constellation Program. As an executive at Johnson Space Center, she has supported tactical operations and strategic planning.

While working for the space shuttle program office, Wyche’s hard work and dedication were recognized prompting a career leap that led her to greater accomplishments. “I went from managing individual payloads for the shuttle to being the one responsible for all crew, cargo and International Space Station flight requirements. It was a big leap that taught me I was capable of accomplishing amazing things if I built and motivated a high performing team,” she said. “I still value the importance of a strong team and what they can accomplish.”

As the youngest of five children, Wyche grew up naturally inquisitive while learning how to view obstacles as challenges to be met. Her colleagues say the most important lesson she shares is “don’t let your environment define you.” It is a truism bred, she says, from growing up without access to the resources for youngsters interested in engineering.

She is passionate about the next generation of explorers and is a mentor and staunch promoter of Science, Engineering, Technology, and Math (STEM) education. Committed to inspiring interest in STEM fields, she is active with local schools, churches, and organizations such as Boy Scouts and Jack & Jill of America. Her many outreach activities include being featured on CareerGirls.org, a video-based career exploration tool.

“I became aware of the impact that NASA has on people,” Wyche said of realizing she had picked the career that is right for her.  “Upon sharing what my role at NASA is with young and older people alike, they would become engaged and ask lots of questions about NASA’s plans. Seeing how the public connects with NASA and its relation to their own desire to explore, convinced me I had chosen a career that could be inspirational for others.”