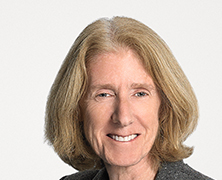 Over the course of her legal career, Valerie Ford Jacob has established herself as one of the most accomplished capital markets attorneys in the world. A driving force in high stakes banking and finance law, Jacob’s work is well-known on Wall Street and beyond.

As a partner with Freshfields Bruckhaus Deringer LLP in New York, she is co-head of the firm’s Global Capital Markets Practice and its Financial Institutions Group, regularly advising a number of leading companies. The firm is based in 28 key business centers across the United States, Europe, Asia, Latin America and the Middle East and its US practice is a key part of this global network.

She is universally recognized as one of the premier practitioners in her area of the law, receiving consistent recognition by leading attorney directories such as Chambers, The Legal 500 and IFLR. Described by clients as “a legend in the business,” Valerie was named “Finance Lawyer of the Year” at Chambers USA’s 2012 Women in Law Awards. She is also a member of The Committee of 200 (C200), an invitation-only membership organization of the world’s most successful women business leaders. Prior to joining Freshfields, Jacob practiced for decades at the law firm Fried, Frank, Harris, Shriver & Jacobson LLP, where she spent 28 years as a partner, including 11 as chair of the 500-lawyer firm. At the time, The American Lawyer named her one of the top 45 US lawyers under the age of 45 for her work establishing and growing a capital markets practice.

Jacob has also set herself apart as a leader in the community. Outside of the office, she devotes time as founder and director of Metropolitan Oval, an organization affiliated with the US Soccer Federation offering youths of all backgrounds the opportunity to play soccer, in addition to being a mother of three and grandmother of one.

She holds a JD from Cornell Law School and a BS from Boston University.