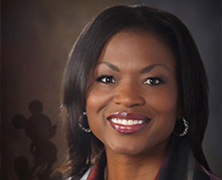 Until recently, Tracey Powell was the vice president of operations for Deluxe Resorts at Walt Disney World Resort. In that role, she oversaw operations at all deluxe resort hotels at Walt Disney World. Today, she serves as vice president of commercial management for resorts. In this new role, she is responsible for driving new business initiatives within the hotel’s profit centers.

Powell joined The Walt Disney Company in 2002 as a manager in resort pricing, and held several positions with increasing responsibility. She eventually served as vice president of global initiatives and integration for Walt Disney Parks and Resorts, where she led strategic business initiatives, all while driving synergy between internal business partners to enhance the guest experience.

As a member of the Walt Disney Parks and Resorts Diversity Council, Powell champions change with a goal of shaping a culture of inclusion and leadership.

“This year marked the 10th anniversary of the Disney Dreamers Academy. The high school students (Dreamers) who participate each year are such an inspiration to me,” says Powell. “This year, one young man specifically stood out. He demonstrated such bravery and conviction that he was voted the Courage Award by his fellow Dreamers. With Disney Dreamers Academy, Walt Disney World hopes to enhance and change the trajectory of these Dreamers’ lives. Well, that young man changed my life. I’m honored to be the executive champion of this powerful program for youth.”

Powell credits one former role as being integral in expanding her inclusive leader experience. “In my role as VP, Global Initiatives and Integration, I was leading teams in Hong Kong and Shanghai remotely. I had to gain trust quickly, so that the team and partners could be as productive as possible,” she explains. “It was important for me to understand the differences in cultures to find ways to connect with the team. This allowed us to be innovative and drive the business. Although cultures can be very different, there are commonalities that bring people together.”

“Fostering an open-minded and innovative culture with a focus on diversity and inclusion allows leaders to continually adapt to the needs and priorities of our business. This enables our organization to elevate performance based on ever-shifting business dynamics, thus expanding our relevance in a global marketplace,” Powell concludes.