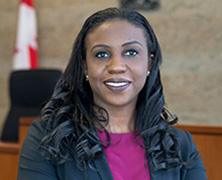 We have to learn to walk before we can run.

After practicing law at prestigious Bay Street firms and representing numerous clients in high-profile cases, Tanya Walker decided to open her own boutique litigation firm. That was seven years ago. Today, Walker Law P.C. has earned a reputation for excellence within Toronto’s financial district.

Walker is the first black female bencher elected from Toronto to the Law Society of Upper Canada, which she views as her greatest professional achievement to date. She is also a member of the Supreme Court of Canada Liaison Committee, has written many articles and regularly appears on television as a legal expert. Walker received the Precedent Setter Award (2016); The Canadian Association of Black Lawyers Law Practice Award (2015); and The National Bar Association Chair’s Award for Outstanding Service (2014). She was also named The Universal Peace Federation’s Ambassador for Peace from two organizations affiliated with the United Nations (2014).

To become an effective leader, Walker believes there are some important traits one must have. “Confidence is needed, as are emotional intelligence and the ability to focus on and build up individual strengths. A successful team leader will encourage their team members to work together and achieve success by taking advantage of each other’s strengths.”

For Walker, diversity means “to create and nurture an environment without artificial obstacles – an environment where character and merit matter most.” She goes on to say, “Talent isn’t measured by your skin color. A business that treats everyone equally, including those from diverse backgrounds, creates a positive environment where employees can work more effectively towards a common goal.”

Walker regularly mentors women who are building their own legal careers, and she offers this advice, “Work hard, have mentors and learn from failure. Do not be afraid to fail.”