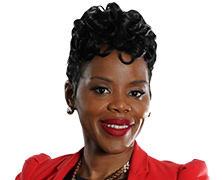 Sisterhood and the curation of authentic relationships are concepts I have always been passionate about. However, throughout my career as a black woman attorney, I have realized that the sentiment of cultivating authentic sisterly bonds is often overshadowed by unhealthy competitiveness and opportunism. So when I was inducted as president of the Association of Black Women Attorneys (ABWA) in November 2017, I used my presidency as a platform to promote not only the eradication of the status quo, but also to bridge the gap between black women attorneys, both personally and professionally, creating an environment where such authentic relationships could flourish.

Recognizing the importance of sisterhood and authentic relationships, I introduced the theme, Changing the Narrative, during the first portion of my presidency. From that theme, emerged the 2018 ABWA Empowerment Series: A Fireside Chat, entitled “A Woman’s Rise to Leadership,” hosted by Christian Louboutin, with Tracy Richelle High, the first black female partner at Sullivan and Cromwell LLP. Another fireside chat, entitled “Intersection of Gender, Age, and Power” with Baltimore City State’s Attorney Marylin Mosby and hosted by Essence, was included in this series. The series successfully created a safe space where ABWA members felt comfortable being vulnerable and having candid conversations.

Subsequently, I expounded the theme during the second portion of my presidency by introducing Igniting Change. While this theme also built upon the curation of genuine relationships, it was geared towards motivating ABWA members to be more politically engaged. From it, emerged ABWA’s involvement in election protection programs, voter registration drives, and initiatives, as well a fireside chat entitled “Black Women and the Political Landscape: Black Women Uniting in a Fractured Political Era,” featuring Andrea Stewart-Cousins, the first black female counsel to the majority leader of the New York State Senate, as well as other dynamic female political leaders. As I had hoped, I successfully utilized my experience as an employment attorney as the perfect segue to bridge the gap between black women attorneys, personally and professionally.

My efforts have constructed a stage for ABWA members to stand on and become more empowered and enthusiastic about cultivating a sisterhood. I plan to conclude my presidency by escorting 38 women across the globe, on a journey to Accra, Ghana, to “Reinforce Bonds and Connection with the Diaspora.” It is my belief that this will bring my themes of Changing the Narrative and Igniting Change full circle.