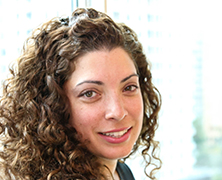 As the national director of human resources at DIALOG, Tania Oppedisano manages the design firms’ diverse culture across Canada.

Her colleagues say she brings big picture thinking, enthusiasm, and energy to her daily work. They also say she’s an expert at finding the right hire to fit the firm culture at its various studios.

Most recently, Oppedisano revamped the firm’s annual employee performance review into a progressive, ongoing development program focused on individual goal setting and professional development. The goal is enhancing performance, retention, and ensuring corporate strength. After joining the firm in 2009 as its HR manager, in her initial two years Oppedisano grew the talent pool at the company’s Toronto location from 37 to 130 employees.

In addition to culture development and mentorship, Oppedisano works to identify business strategies and relevant metrics to ensure retention and success rates remain strong in DIALOG’ studios in Toronto, Calgary, Edmonton, and Vancouver.

She says her biggest career leap was moving from a corporation to start-up business. “I learned my passion lies in building an organization from the ground up,” she said. She provides leadership to DIALOG’s administrative team, while working with studio directors and team leaders on human resources strategy and initiatives.

The company has been named a Top 100 Employer in Canada for three consecutive years and Oppedisano has been instrumental in its growth and success. DIALOG is a fully integrated, multi-disciplinary design firm, with a focus on architecture, engineering, interior design, urban planning design and landscape architecture.

Oppedisano believes the most important quality a woman leader should have is empathy and says one is never too young to reach for the next role. “Be yourself and be proud of it,” she said.

Oppedisano is actively involved in the community, having been a key contributor to the company’s support of the Centre for Addiction and Mental Health (CAMH), The United Way, Jane’s Walk, and a variety of other community and charity initiatives. She holds a Masters in human resources and a BA in sociology from York University, and a certification in human resource management from Humber College.

Words she lives by: “Be yourself and proud of it!”