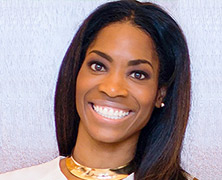 Spending time with husband and children watching the latest Netflix movies, participating at church, and running/working out

Create a vision so big that it’s impossible to achieve it alone, and in doing that, always remember where your strength comes from. (Joshua 1:9)

Forged in Crisis: The Making of Five Courageous Leaders by Nancy Koehn

The Key Ingredient in the Secret Sauce of Our Identity

Throughout my career, I’ve been purposeful about being a kinetic leader—one focused on proactively addressing the most complex problems in order to drive transformational change, yield business growth, and lead an agile team. That type of leadership style has allowed me to tear myself away from routine thinking and behavior. And during the pandemic that leadership style allowed me to pivot even further to not only drive solutions and success, but also to drive a different level of conversation—based not only on corporate values and goals, but on personal ones as well—with my team, colleagues, and technology / business partners.

I think traditional leadership—or even pre-pandemic leadership—conversations tended to be more formal, static, and sometimes even opaque. The pandemic, however, ushered in an opportunity to more naturally elevate conversations; manufactured scripts gave way to authentic communications and expected responses yielded to genuine reactions. As a result of the shared a global crisis, my leadership style shifted and I became a leader that drives an even more sincere and palpable culture of belonging and inclusion for those around me.

And that culture became contagious. Not because it was being measured, but because it was modeled. I was able to not only create an environment where others felt comfortable with being transparent about who they were and what was important to them, but also where there was an expectation that I would continue to be transparent—even more transparent than I had been in the past. For me this meant several things: communicating less over email and more through in-person or video interaction, participating in more personal engagement with my team and others, allowing myself to be a bit vulnerable, and inviting conversations about our differences—how those differences are sources of strength and the secret sauce of our identity, both individually and within the team.

Further, I formally implemented upward feedback across the team, so that there is transparency in not only identifying and maintaining our strengths, but also in building areas of growth and development. Each of these things created a deeper level of trust, established a precedent that spread throughout the organization, and elevated the level of team devotion. Equally worth noting, however, is that through discipline, openness to feedback, and a sincere dedication to transparency and inclusion, I became the type of kinetic leader that was needed—not only for the business, but for those around me.