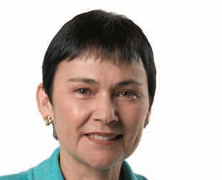 An excellent education is the best legacy we can leave our children.

The Five Equations That Changed The World (Guillen); Wisdom of Crowds (Surowiecki); Harry Potter and the Half-Blood Prince (Rowling)

The Cruz & Eligia Montero Scholarship Fund/Barnard (in honor of parents)

Sometimes you have no idea what is out there until you see it with your own eyes.

I grew up in New York City, the daughter of two proud and traditional Latinos. My parents ingrained in me the basic belief that getting a good education was the key to a better life. I worked hard in school because I wanted to go to college. As college approached, I applied only to city schools because the thought of going to a private school was just too foreign to me.

But my high school mentor had other ideas, and told me to apply to Barnard College. I remember going to campus for an interview and being absolutely overwhelmed by what I saw. It was a new world—a world so different from my own but somehow one that I wanted to be a part of, and I was fortunate enough to be given a full scholarship. The decision to go was easy.

Barnard did more than just give me an incredible education; it also exposed me to people from backgrounds very different from my own. Another view of the world opened up. I believe that the biggest negative of growing up as a minority is the impact it can have on your self-esteem. You begin to think that the people who discriminate against you may just be right, maybe you really can’t compete outside your own circle. But being able to learn alongside these amazing, sophisticated women showed me just how big the world really is and how much was available to me if I wanted it. My own strength and courage to go for what I wanted grew, and I was no longer satisfied settling for what was handed to me. If I hadn’t seen what was out there for me with my own eyes, my dreams might have been more limited.

Sometimes you have no idea what is out there for you unless you see it with your own eyes. So look for what you want to see. Remain open to the world you have yet to discover. Believe that you belong anywhere you want to be, no matter where you once were.