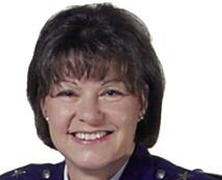 Traveling, biking, water sports, gardening and, because I love my husband, golf

Worked at a cattle ranch in Boulder, Wyo., during high school; worked requirements and development of national satellites as a 2nd lieutenant

Bring Me Men.” Those three words, forged into towering steel, greeted me as I marched through the entrance to the Air Force Academy in 1978, a member of the Academy’s third class with women. Weeks later, I discovered the phrase came from a poem by Samuel Walter Foss, “The Coming American.” When I heard it sung by cadets in our hallowed Academy chapel, it served as the first of many mentoring lessons: That meanings often go far beyond the words.

Foss’s powerful verse is a call for citizens of impeccable character to serve and defend our great nation. An eloquent poem, it speaks clearly about who and what the Air Force prizes. Integrity, excellence, service and the desire to make a difference are the core values of the Air Force. Diversity categories of gender, creed, heritage or hometown simply aren’t important relative to the ability to contribute. The lesson: It’s vitally important to understand the characteristics your profession holds dear. Those who succeed will inevitably be those who are comfortable, and thus effective, within that value system. In my organization, it’s about warrior wingmen striving to make a difference.

Throughout the years, I’ve been fortunate to be around people who placed teamwork ahead of personal gain. Airmen who “have your back” are known as wingmen. This ethos creates a team atmosphere and inspires heroes to fight courageously, side by side, to win.

Mentoring also plays a strong role in Air Force culture. On my first day as an officer, my boss asked me, “Do you understand the difference between professional and personal criticism?” I was about to receive loads of the first kind. Today I’m no worse for the wear and entirely grateful. It made me a smarter technician, an effective commander and, hopefully, a stronger leader. The decision to seek mentoring, especially criticism, is a sign of character. Leaders, in any organization, will not devote precious time to a member who won’t listen when the news is tough.

I continue to serve because I’m proud of our core values. I enjoy the wingman spirit and the contributions we make as a result. When Foss wrote “The Coming American” in 1894, he summoned mankind to be inspired, to match mountains, make celestial claims, guard mighty ramparts and, most importantly, to stand at freedom’s door. He asked for me—an American—to serve proudly and make a difference.