Partner and Chair of the Healthcare, Life Sciences and Technology practice group 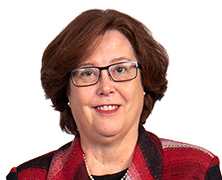 In both your personal and professional life, treat everyone with dignity and respect and be yourself.

During high school, I worked summers driving a forklift in a bookbinding factory in Wisconsin. It was a union job that helped pay for college.

Heifer International, a nonprofit that provides animals to underdeveloped countries. Heifer supports Guatemala, where my daughter was born, and she enjoys choosing animals to donate.

Don’t Let Others Define Who You Are

Attitudes about women in the workplace have, thankfully, evolved since my entry into the workforce. Having spent the first twelve years of my career as a physician assistant, before becoming a lawyer, I’ve seen these changes not only in the legal industry but also in healthcare. There are a number of parallels between the challenges faced in these two industries that traditionally have been male dominated, such as gender pay disparities and lack of women in leadership positions. Because of these inequities, some women colleagues believed they needed to be very assertive and act “more like a man” in order to avoid being left behind or overlooked.

In my view this seems to be a generational phenomenon that has evolved. Younger generations of professional women appear to feel comfortable being assessed on their intellectual capacity and work product. Similarly, more junior and mid-level professionals appear to be more comfortable taking full advantage of parental leave, where in earlier generations, there was always pressure to return to work as soon as possible to reclaim your seat at the table. Such outdated attitudes aren’t gone, but they are noticeably less pervasive.

Likewise, concern about a woman’s productivity because she has family obligations has become much less of an issue. In fact, I believe working mothers are entitled to extra credit because they know how to effectively manage their time, prioritize, and get things done. Women have also blazed the trail for law firms to become more flexible in terms of working remotely, arranging flexible work schedules, and establishing reasonable parental leave policies. These changes help all employees, regardless of gender.

Each of us has the ability and obligation to change outdated attitudes by not giving them credence. I give similar guidance to my son, who is gay and endures many stereotypes. We can prove misperceptions wrong by not giving them the energy to keep them alive. The same goes for my Latina adopted daughter. People make assumptions about external attributes and we should not give those assumptions life by internalizing them.

We all have the ability to do the same—don’t take on these stereotypes, don’t internalize, and don’t feed into outdated attitudes. Don’t let others define who you are. And be the change agent who makes things better for those who follow.