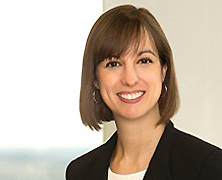 Susan Morrison comes from a long line of scientists and doctors – including her father, grandfather, and great grandfather.

She started her career in STEM as a bench scientist in an academic lab, but quickly realized a traditional STEM career was not for her. She went on to law school, and now spends her days working with scientists and inventors to protect and defend their inventions. It is not uncommon for her to be the only woman in a meeting or a deposition, or the only woman to speak during a week-long trial.

Morrison works on intellectual property and patent litigation cases across a full range of technologies at Fish & Richardson. Her STEM background has been especially relevant to her work in Hatch-Waxman litigation, a very complex type of patent case that involves disputes between patented and generic pharmaceutical manufacturers. Her professional accomplishments and leadership in the male-dominated field of patent law are an inspiration to other women in STEM. Last year, the 37-yearold was selected to serve as the managing principal of the firms’ Wilmington, Delaware office.

In the words of Susan Morrison:

What can be done to move women forward in STEM?
“Policies like paid maternity leave, flexible work schedules, and job sharing can go a long way toward preventing women from leaving STEM fields. Keeping women on track and in their careers is the simplest and most effective way to move women forward.”

How can the world increase diversity in STEM fields?
“Increasing diversity in STEM fields has to start with children – we cannot expect that we can simply start encouraging women to enter science once they are in high school or college. Only then will we see them choosing STEM majors in college and as they enter their careers.”

Where do you see women in STEM in five years?
“I hope that in the next five years, we’ll see an increase in women in STEM fields. I think we also need to redefine what we consider STEM fields to embrace a larger group of people.”

Words I live by:
“The best advice I have for young attorneys starting out is to be themselves. While I learn something from every attorney I work with, I never try to exactly emulate another attorney’s style. Trying to be someone else never goes well, and ends up looking fake to whatever audience you’re in front of – a client, a jury, or a judge.”