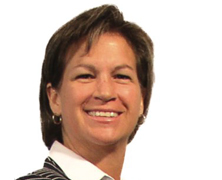 Whatever you do, give it your best. No one can ask for more.

My Kindle shows I am halfway through The Lion, by Nelson DeMille; Too Big To Fail, by Andrew Ross Sorkin, and Twilight Series, by Stephanie Meyer.

A life guard and swim coach. First professional job was as an Actuary

I’m often asked about my mentor, or how I used a mentor during my career, or whether or not I found a mentor helpful. My answer is always that I have decided that there is no single approach to mentorship and that it is an amorphous concept. I have worked with organizations, including my own, which have struggled with the implementation of various mentor programs, whether formal or informal, forced or voluntary, self-selecting or assigned, web-based or personally vetted. I believe there has been more discussion around the role of mentorship in the course of increasing diversity, particularly at senior levels of an organization, than about any other program or tool used to that end.

It is truly a unique situation when someone can point to a single mentor from whom they garnered support, advice and advocacy throughout their career. Just as personalities, skill sets and career paths alter over time, so do the ways in which mentors are helpful to an individual. In retrospect, it is no surprise to me that I have not had one mentor during my career, but many. Each had his or her own unique ability to provide insight, guidance or counsel, and each did so at a unique point in time over the course of my 23 years in this business.

Notably, there was little in common among them. They were of both genders and of all backgrounds, levels, and skills. Some were as helpful for the things they showed me not to do, as for the things they did that I have emulated. Some of them were in my reporting chain, and others were far removed from it. They dispensed advice that ranged from professional to personal, from the smallest suggestions to the grandest plan. And yet each made a permanent impression on me and in my career.

I do not believe I have ever declined when asked to be a mentor to someone. I have, however, always noted that the course of the mentoring relationship would likely take any number of forms and that neither of us should go in with any specific expectations. Some have lasted through the years and others were intense for a time and have since faded. But each provided some value to both the mentor and the mentee. I will continue to say yes to any who ask, and look forward to watching the evolution of those relationships, just as I enjoy watching the evolution of my new mentee’s career.