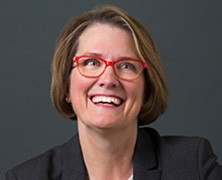 Make inclusion a priority. Be real. Be authentic.

Su Rankin’s story is one of determination, perseverance and a passion for finding ways to add her unique value to the agribusiness industry, helping blaze the trail for women in the field and making sure Land O’Lakes delivers on its mission to feed the world.

Rankin started her career as a canning foreman – the only female foreman – overseeing production at a meatpacking plant. She was then hired in a managerial position and learned on the job how to lead and develop her team.

This job helped Rankin realize that supply chain and manufacturing was the place for her. She found mentors in other colleagues and learned the ins and outs of a production line. She learned more exponentially in those first three years on the manufacturing floor than in any position since.

Gaining so much early in her career, Rankin has become an advocate and mentor for other professionals – especially women. She leads the Women’s Leadership Network, which is one of six employee resource groups at Land O’Lakes. She also facilitates the company’s new roundtable series, which gives employees and leaders an opportunity to discuss tough topics. Rankin also sits on the Diversity Enrichment Council and recently helped Land O’Lakes achieve 100% on the Human Rights Campaign’s Corporate Equality Index for the fourth consecutive year.

With all this success, Rankin says her proudest achievement was earning an MBA at the age of 48. “I learned a lot, but that experience really gave me an opportunity to build my network. I didn’t have much of one and the MBA program allowed me to make connections across the Twin Cities,” she explains.

Looking back on her early career, Rankin says she spent time trying to get others to hear her concerns. “I think I’m finally at a level where I can start being the one to listen to and have an impact on company-wide initiatives regarding inclusion, and making it a priority,” she says.