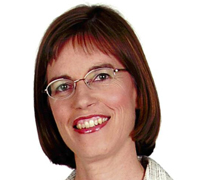 I would like to inspire young women to achieve their best potential by learning and growing in a career they love.

The World is Flat, by Thomas Friedman

Camp counselor during the summer in high school

United Way and the Girl Scouts

My primary advice is to follow your passions because mine have taken me to some unexpected and exciting places. I originally dreamed of being a doctor, until I saw the Rockies and learned that the formation of those fantastic structures could be scientifically explained. When I graduated, I sought a place where applying this knowledge could be a career.

Fitting in: At Shell, I started as a geologist visiting offshore rigs, an environment that was not accustomed to women. The awkward reactions I received offshore also occurred in the corporate office, but they were subtler. I quickly learned that the way I reacted to comments could relax the tension in the room. To succeed around the guys, I had to fit in. The trick was learning how to do it without giving up the unique qualities I could bring to the team.

Enjoying The Journey: Throughout my journey, I wanted to show I could solve tough problems, be a strong team player and go the extra mile. Through a variety of roles, I learned how the business worked from many angles. After 18 years, I received a promotion that transported me from my comfortable home in exploration and production to a new role as president of Shell’s largest U.S. refinery.

Growing as a Leader: Leadership development accelerates when you are stretched beyond your current skill set or when you are placed in an environment where you don’t know the basics. I faced both at the refinery and learned valuable lessons that helped me formulate my leadership style.

The first is to be a fast learner. The second is to ask when you don’t understand, rather than pretend that you do. Finally, developing mutual trust and respect is key, beginning with leaders respecting employees, regardless of titles. With these principles, you create an environment in which problems are put on the table, challenged and quickly resolved. People are proud to be a part of a winning team, and success drives more success.

Leaving a Legacy: Throughout my career, mentors both inside and outside of work have guided me. They picked me up during difficult times and stretched me with new opportunities. In time, I began to help others discover their potential. Much like the movie Pay it Forward, if we could each make a difference in the lives of a few individuals, imagine the impact we could have.