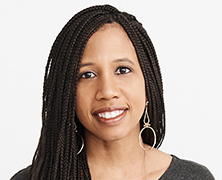 I seek to understand every day and every challenge as necessary and important to my professional growth.

As a teen, I worked at Cinnabon and Dairy Queen. After college, I began my career as a lawyer at Vorys, Sater, Seymour and Pease, LLP.

Pardon Me, Your Unconscious Bias Is Showing

It is well known that women and racial/ethnic minorities face workplace challenges that are specific to our gender and race/ethnicity. Responsible organizations are addressing those challenges and attempting to create a level playing field for all employees. After litigating employment matters for nearly 20 years and researching this topic, I believe the best way to rebuff workplace discrimination is to address and control unconscious bias.

First, we must acknowledge that unconscious bias exists, that it plays a significant part in our lives, and that it causes us to treat others unequally. In a study by Dr. Arin N. Reeves, a legal memorandum was distributed to 60 diverse law firm partners. (See Yellow Paper Series, Written in Black & White, Exploring Confirmation Bias in Racialized Perceptions of Writing Skills, http://nextions.com/wp-content/uploads/2017/05/written-in-black-and-white-yellow-paper-series.pdf, 2004.) Thirty partners received a memorandum authored by White Thomas, the other 30, by Black Thomas.

Aside from the author’s race, the memos were identical, including typing, grammatical, and factual errors. Nonetheless, those evaluating Black Thomas’s memo found more errors than those evaluating White Thomas’s memo. The evaluators concluded that Black Thomas “needs lots of work” and is “average at best,” while White Thomas was seen as having “potential” and “good analytical skills.” The study concluded that when we expect to find errors, we do, and that there are commonly held race-based perceptions about abilities, such as writing, that impact our ability to be objective.

It is this sort of bias that makes individuals expect that women and racial/ethnic minorities are not able to think, speak, function, and perform like their male and white counterparts, resulting in higher criticality, harsher work evaluations, and decreased likelihood of hiring and promotion. (See Science Faculty’s Subtle Gender Biases Favor Male Students, www.pnas.org/cgi/doi/10.1073/pnas.1211286109, 2012)

Second, organizations must create and leverage policies and engagement strategies to mitigate against unconscious bias. Training people to recognize and prevent unconscious bias, supplemented with comprehensive nondiscrimination and anti-harassment policies, can help push inclusive-culture messaging throughout the workplace.

Organizations must also implement bias interrupters to monitor, audit, and correct biased behaviors before they impact workplace decisions. These interrupters should be found at every juncture of the employment lifecycle and be used as benchmarks to track progress towards a more inclusive workplace.

Ultimately, employers who recognize unconscious bias and take steps to impede its impact will create a more inclusive environment where all employees are able to thrive.