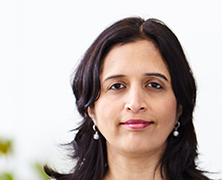 Sripriya Raghunathan knew she wanted to be an engineer as early as elementary school when she set out to pursue a career in computer engineering.

As VP of Systems and Software Engineering at the $7 billion Harman International Industries, Raghunathan has been developing software for American automobiles over the past 14 years.

She brings a powerful mix of technical, analytical, and managerial skills to her role. As automobiles become more connected, with multiple onboard computers and hundreds of millions of lines of code, experienced software engineers are critical to the safety and security of drivers on the road. Raghunathan understands and appreciates the magnitude of the responsibility involved.

Her colleagues say she leads by example, demonstrating accountability, a balance of autonomy and collaboration, communication and critical thinking, combined with a genuine desire to see her teams succeed. Raghunathan is comfortable solving complex problems and supporting and motivating others within the company. She enjoys serving as a leader to set strategy, as well as a resource for teaching, motivating, mentoring, and guiding professional development.

She says her biggest career leap was the move from a technical career path into management. “I quickly realized I could still make an impact technically while grooming a team and growing as a manager,” Raghunathan said.

She believes the most important quality instrumental to a woman leader’s success is perseverance. She advises to take risks early in life and to think big. “You can achieve the most ambitious goals, if you put your mind to it,” she said.

Growing up with two sisters who are also engineers, promoting STEM is personally important to Raghunathan. Her efforts to support female empowerment were recognized during the Harman Women’s Network 2016 International Women’s Day event, where she was profiled for making a difference in the corporate and local communities she’s served. She holds a B.S. in Computer Engineering from Madurai Kamaraj University, India.