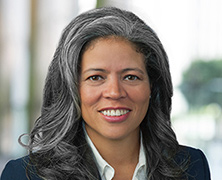 Do my best; work hard and play hard!

When I was in high school, I worked at IBM during the summer. My mom encouraged me to meet lawyers in the legal department because I wanted to be a lawyer. So, one day, I wandered down the hall to the legal department and I met an attorney. We talked about college, law school, and becoming a lawyer. I will always remember his advice: take the path of least resistance: go to the best school that you can, get the best grades you can; and give yourself the best opportunity to excel. So there it was, some of the best career advice I have ever received.

I also received advice as a young lawyer that dramatically impacted my career. I was fortunate to be mentored by a partner in a law firm who took an interest in my career. I was at a crossroads, my father had recently died and I felt that I should go back home and work in Washington, DC, but I had previously decided to work in Houston. My mentor suggested that I consider working for the law firm, but in the Washington, DC office, rather than in Houston. I had not considered the Washington, DC office because it was small, and in fact had worked at a different law firm in Washington, DC during the summer.

My mentor introduced me via conference call to the managing partner in the DC office, who also headed the energy regulatory practice. In addition to that introduction, he told me that the energy regulatory practice was difficult, that it was interdisciplinary, would be challenging, and was very profitable. Equally important, my mentor told me that it would be a good practice area for me because I needed a challenge.

Since that time, I have had several mentors, both in my practice area and outside my practice area, within the firm and outside of my firm. As important, and at times more important, I have had sponsors who were willing to invest in me, support me, and defend me. I would never have become the lawyer I am without them. So, seek advice and counsel, seek out areas that are unfamiliar, and be open to advice and mentoring from many different people.