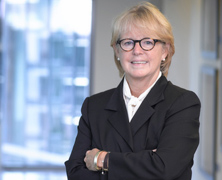 Learn from your mistakes.

I made the move from executive dean of the Kennedy School at Harvard University to deputy secretary at the Smithsonian Institution because of family considerations. My oldest child was beginning high school, which can be a very challenging transition, so I wanted to be more accessible, rather than commuting between Washington, DC and Cambridge every day of the week. I also saw the change as a tremendous challenge and opportunity.

At Harvard, I gained experience running a complicated academic institution with a multiplicity of responsibilities that I had not previously managed, including human resources and information technology. Key to that experience was the ability to build a team and to get buy-in for necessary changes. This entailed building a consensus in a multifaceted organization that included faculty and staff. That same skill was valuable in my work at the Smithsonian, where consensus building involved volunteers, academics, and long-serving Smithsonian experts.

Learning to work with academics to reach consensus on what appeared at the time to be relatively minor issues was extremely valuable. The broader lesson is the importance of engaging people in decision-making. Rather than presenting them with a fait accompli, letting people be part of the process increases the likelihood of being able to reach agreement. It rarely works to just pronounce a solution, even when you have the authority to do so. It is always worth your while to build relationships with people who are both junior and senior to you. In my case, whether it was the women who worked in the Senate dining room or one of the security guards, I tried to create a collaborative environment. That approach not only recognizes the importance of their work to the organization, you’ll find they are excellent sources on what’s happening within the organization, which can be helpful to you as a manager. The instinct is to ignore the junior folks, which is a huge mistake, because they are the backbone of an organization.

On Finding Success and Staying Competitive
Be absolutely honest in all your dealings.

On the Importance of Role Models and Mentors
My first nursing supervisor was a tremendous role model who taught me two very important things that I have carried with me throughout my career: First, take responsibility for your actions and finish what you start; and second, never forget who the customer is. In that case, it was the patient. But I’ve found that advice is applicable in any profession, and it has served me well to this day.

On Facing Challenges
Having someone believe I wasn’t up to the job that I was interviewing for, and working to prove I could do it, instead of giving up.

Sheila’s Advice to Young Women Starting Careers
Be the best prepared person in the room.