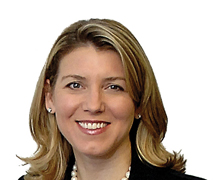 Volunteering as a search and rescue dog handler; working out; gardening; scrapbooking.

Do the right thing—it almost always pays off in the long run.

Charities that help both people and animals, such as Puppies Behind Bars, Paws with a Cause, among others.

How does a scientist end up in the corporate world? It’s a question I’m often asked and the answer involves a journey that passes through the halls of Congress and the offices of the White House.

My interest in science started early. My mother, aided by a book entitled, “Science Experiments You Can Eat,” oversaw countless kitchen-based projects that further stoked my curiosity, and were—on occasion—actually edible. Because she worked in a laboratory, my mother often brought home leftover or borrowed projects for us to work on. So for me, helping my mom dissect a frog was a perfectly normal after-school activity. I also had a number of good teachers, and a few truly great ones, who helped prepare me for the rigors of my future scientific study.

It was during graduate school when I realized that, while I loved the challenge of performing scientific research and the thrill of discovery, I did not want to spend my career as a research scientist. Instead, I became increasingly intrigued by the policy realm: how decisions that affect people’s lives get made and implemented. I realized that many of those decisions are, or should be, informed by science, and I wanted to be part of the action. Thanks to a fellowship program sponsored by the American Association for the Advancement of Science, I made a relatively seamless transition from the lab bench to Capitol Hill. I caught “Potomac fever,” as it’s known, and my transition from the laboratory to the Washington, D.C. policy world was sealed. From there, new and exciting job prospects seemed to materialize just when I was getting hungry for a fresh opportunity, leading me to a position in the White House and, most recently, to the business world.

I’ve been lucky. I have had several mentors during different phases of my career—almost all of them scientists—who encouraged and challenged me, imparted insight, and, eventually, supported my somewhat unorthodox career choices. The gift of mentorship is one I’ve tried to pass on to others, in part by trying to help dispel the notion that the pursuit of scientific study is a oneway ticket to a life spent isolated in a laboratory. In reality, that couldn’t be further from the truth, and the demand for technically skilled individuals with well-honed critical thinking skills will only strengthen in the high-tech, global economy that exists today.