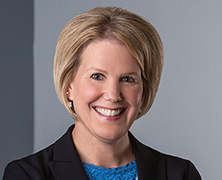 Treat everyone with kindness, respect, and compassion, and fight fiercely for those I love.

How to be an Antiracist by Ibram X. Kendi

I like to call it “Landscape Beautification Specialist”—I mowed lawns.

Tubman—I am on the board of directors and am a passionate supporter and advocate.

Remember, You Can Do This

Throughout my career, I’ve learned that you never reach the point of knowing it all. Instead, it’s about getting comfortable saying, “I don’t know.” Of course, this is easier said than done. Which is why 10 years after joining RBC, when I was approached about a role as head of HR, my answer was a visceral “NO!”

It’s not that I wasn’t interested in the job. I knew the incredible impact HR could have on employees’ lives, and that my upbringing and years in employment law would offer a unique lens. I didn’t think I was ready, qualified, or good enough. And then there was my family. With two small children, I came in early and left early. Would I need to compromise that schedule? Would I see less of my kids?

After some soul searching and an honest reassessment of my skills, I realized that I wanted to go for it. I called my manager and told her I changed my mind. I was convinced not only that I could do this job, but that I might actually be able to make a difference.

After what seemed like a never-ending interview process, I got the job!

A week later, I was diagnosed with breast cancer. I was sitting at my desk at work when I got the call. My immediate response was, “I can’t tell anyone at work. I don’t have time for this!” So I dusted myself off, wiped my tears, and headed to my next meeting.

At that point I thought I’d have to back out. I couldn’t stand the thought of having to tell all the people counting on me that I couldn’t take the role. But then I thought about my mother. At age 27, she was diagnosed with a severe form of cardiomyopathy, a disease that severely limited her mobility. Despite her limitations, she always faced hardships with positivity and humor. When I thought about what she went through and the grace she showed, I decided I could take on this new role AND beat breast cancer. But I was going to have to let go of the notion that I could do it all at the same time.

I worked with my oncologist to safely push my surgery back far enough that I could transition out of my old role and lay some ground work for the new one. Then I had my surgery and spent six weeks at home healing. I didn’t work—not one bit.

When I came back, everything was okay.

I’m okay too, and so is my family. I still leave by 4 p.m. nearly every day to get my kids. On those days, I fight the urge to sneak out unseen and instead announce my departure. I want other women to see that I’m sticking to my core principles in my new role. Because when it comes to principles, NEVER compromise!