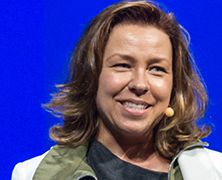 “The Twelve” by Justin Cronin

For this Electronic Arts SVP, Success Is All About How You Play the Games

Samantha Ryan joined Electronic Arts in March 2015 as senior vice president and group general manager for EA Mobile, where she will lead the PopCap, Waystone, and Firemonkeys teams to drive successful live services and develop the next generation of mobile games. In her new role at Electronic Arts, she’s tasked with leading incredible mobile games like Plants vs. Zombies, Real Racing, and Bejeweled, and applying her experience in AAA console and PC franchises to the mobile landscape.

“I grew up as a gamer,” said Samantha. “We had an Atari 2600 and a Commodore 64 growing up. At that time, you couldn’t pursue a degree in games, but In the back of my mind I wanted to do something I was really passionate about. I always knew.”

As the lead on games like Middle-Earth: Shadow of Mordor, Mortal Kombat X and Batman Arkham Knight for Warner Bros., Samantha is one of the few women who have led the development of “core” videogames. Her leadership on Middle-Earth: Shadow of Mordor led to it being named to countless “Game of the Year” lists and recognized as one of the most critically acclaimed games of 2014. Samantha has emerged as a formidable leader in the interactive entertainment industry traditionally dominated by men.

Prior to joining EA, Samantha served as senior vice president of production and development for Warner Bros. Interactive Entertainment, where she played critical role in the success of titles such as Injustice: Gods Among Us, the award-winning Middle-earth: Shadow of Mordor, and the Batman: Arkham Franchise.

“I was President of Monolith Productions when Warner Bros. acquired the company,” said Samantha. “I had the opportunity to manage all of Warner Bros. Studios, going from managing a 100 person team to eventually over 2,000 worldwide. I got to be there for the full ride.”
Samantha Ryan lives in the San Francisco Bay Area with her family.

The most important quality a woman leader should have is…
…to be a good listener. When you are a manager, especially in a creative, passionate industry like game development, you learn that you need to listen to different viewpoints and bring those together.

The career advice I’d give my former self:
I’d tell myself what I tell everyone: don’t be afraid to leap. I have always pursued positions that other people felt were foolish or thought were too much to take on. But you only grow by pushing yourself.

Words I live by:
“There is no spoon” from the Matrix. Even if you think you have problems, they’re all in your mind.
Everything is flexible.

The one thing I’d do differently in my career, knowing what I know now, is…
…knowing when enough is enough. I’m a very passionate person and when I believe strongly in a person or an idea I back them 100%. I’d tell myself to remember that sometimes a different outcome is possible.

When I really need to focus on a project, I…
…put music on in the background. In my first few years as a DJ there was always music on so now I use it to focus.

My biggest career leap (and what I learned from it) was…
I was President of Monolith Productions when Warner Bros. acquired the company. I had the opportunity to manage all of Warner Bros. Studios going from managing a 100 person team to eventually over 2,000 worldwide. I got to be there for the full ride.

Being a woman in my profession has been…
…unique and fun, particularly because most of my work has been in hardcore franchises like Batman: Arkham and Mortal Kombat and there are so few women working in that space. I wish there were more.

I’ve learned that failure is…
… a natural part of everyone’s career. If you never fail it means you never tried. The important thing is to pick yourself up. I’ve made as many mistakes as you could possibly make, but I’ve had a lot of successes too.

I maintain a healthy personal life by…
…spending time with my family. We particularly enjoy playing games together. My husband and my 11 year old son are constantly playing games.

I knew my present career was what I wanted to do when…
I grew up as a gamer, we had an Atari 2600 and a Commodore 64 growing up. At that time, you couldn’t pursue a degree in games, but In the back of my mind I wanted to do something I was really passionate about. I always knew.