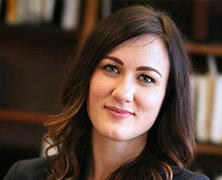 Receptionist at a small law firm in Phoenix, Arizona (during high school)

We Can and Must Redefine the “Law Firms for Men” Model

The law firm model was set up by men for men. Don’t conform to that system. Redefine it. Reshape it.

This often means speaking up, even when it may feel uncomfortable to do so, and advocating for the same changes repeatedly—in different words, to different people, over and over again. Try to advance your point of view in a diplomatic, cogent manner, and really think through what you want to say before you say it.

Often times, your suggestions and advice will fall on deaf ears, but if you keep at it, you will find that there are other people who share your concerns and values. And some of those people will have the power and, even more importantly, the desire to effect the change you desire to implement. Seek these people out. Be proactive.

Don’t compete with female colleagues. Join forces with them. A single voice is easily dismissed, but a collective one is harder to ignore. If repeated efforts do not produce results, don’t be afraid to cut your losses and move on. Some law firms will only change when they discover that they are unable to retain women, and others will never change. You don’t have to stick around to make an impact, but you do need to provide honest feedback during your exit interview.

Make a conscious effort to network with and refer clients to other women. Do business with law firms and other companies that recruit, retain, and advance women to positions with real power; withhold business from those that don’t, and let them know it. In most cases, companies will only change their behavior when that behavior hurts their bottom line.