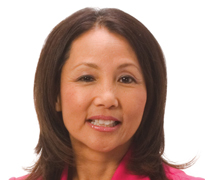 Bachelor’s degree in computer science from the University of California, Berkeley

Question conventional wisdom and use imagination to stretch what is possible. Embrace your difference and always be authentic to yourself.

Men of Salt: Crossing the Sahara on the Caravan of White Gold, by Michael Benanav

Securities transaction processing at Bank of America while in college

I have always been different. When I was growing up, I always thought I would make astonishing scientific discoveries that would change the world for the better, or maybe become an astronaut exploring outer space. Or sometimes I thought I would become a great leader and solve world problems. My heroes were the likes of Albert Einstein, Louis Pasteur, Alexander Graham Bell, Winston Churchill, and Alexander the Great. That they were all male did not deter me.

My family emigrated from Hong Kong to San Francisco when I was 11. I had to adapt to a new culture and a new language. As I got older, I grew used to being one of the few women in math and engineering classes, then being in the minority at work. Further in my career, I was an engineer who was interested in business. I spent many years trying to belong and blend in, before I realized that being an outsider taught me skills that made me an effective leader.

I was a keen observer and interpreter of culture, because I had to understand the dominant culture in order to navigate it. Being an outsider also meant that I had to learn to develop connections with many different types of people quickly. But I also became independent; I had to come up with solutions to problems and not rely on someone else to solve them. A lifelong lesson is not accepting “no” easily and pushing the envelope.

As a leader, having a sense of purpose is extremely important. Being able to connect with others so that they also share your sense of purpose will help you build strong cohesive teams. I find that defining a set of values and articulating them clearly will further reinforce that sense of purpose. I have observed and studied many great leaders, and I have found that the most effective and inspirational leaders are those that are true to themselves. The values that come from your heart will resonate best with others. My final advice is to work in a profession that you love, and to do everything with passion. you will do your best work when you are truly engaged.