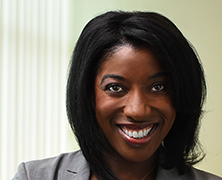 ESPN Executive on Path of Excellence

Rosalyn Durant’s career embodies a path of excellence, achievement and influence that has propelled her at a young age.

Her colleagues say she’s a woman on the rise who has made her imprint within The Walt Disney Company (owner of ESPN), the cable community and the sports world at large. Durant has built her reputation on strategic acceleration of the businesses under her purview and the ability to develop and maintain key relationships.

She is committed to eradicating invisible boundaries for all and sits on the Board of Directors of the T. Howard Foundation, dedicated to increasing diversity in the multimedia and entertainment industries.

Durant launched her career in 1998 as an intern at ESPN and has rapidly ascended to become a top executive within company and the sports community it serves. “I knew my present career was what I wanted to do when I interned at ESPN. I didn’t want the summer to end,” she said.

Colleagues say her influence was immediate. She played a significant role in an eight-year contract extension with the NBA, which at the time was ESPN’s most-comprehensive digital rights package with a major professional sports league. She managed relationships with the NBA, Major League Soccer, FIFA and Olympic sport leagues. In 2008, she was named Vice President, ESPNU, where she maximized the value of ESPNU properties across the company’s multimedia assets, including television, internet, radio, print, broadband and wireless. She’s also spearheaded the development of signature events for the network including the ESPNU Signing Day franchise.

Under Durant’s supervision, ESPNU’s nationwide distribution jumped from about 25 million homes to 74 million, signing long-term carriage agreements with the top 10 distributors, and is a staple of ESPN’s industry-leading college sports programming portfolio.

Words she lives by:  What you do today creates every tomorrow. (Oprah)