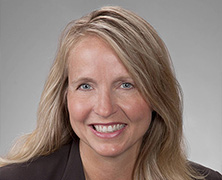 Just Mercy: A Story of Justice and Redemption by Bryan Stevenson

I rogued soybeans and cleaned house for a neighboring farmer.

It's a tie: the Reach Institute and Do the Write Thing

I still remember racing around a field with a gaggle of other young teens, chasing a greased pig thinking that I just had to catch her, before the others. Somehow, smothered in grease, I did. The “prize” was the pig itself, which I proudly brought home to the farm, naming her “Gloria Steinem.” To anyone who chose to listen, she was proclaimed the first liberated pig!

I was out to liberate every female. Of course, I had no idea how. It was 1980, I was a farm girl in Iowa and the Great Jones County Fair week was always the highlight of my year. I doubt anyone who crossed my path would have guessed I’d venture on to Northwestern University (the first in my family to attend college, let alone graduate), then proceed to law school, and eventually, to “Biglaw,” as they like to say. But, I did. Somehow.

That “somehow” was not only the encouragement of my amazing parents but the people who mentored me along the way. My acting and English teachers in high school and college (thank you Ms. Cratsenberg, and Messrs. Downs and Nims) who worked hard to help me develop confidence on the stage (a skill which translates quite well to the court room), as well as persuasiveness with the pen. Environmental law professors who helped “cultivate” my upbringing (i.e., my love for animals and the land) into a practice specialty in environmental law. My many “bosses” in the multiple jobs I undertook while trying to pay my way through it all. They came from different backgrounds, races, and sexual orientations than mine, but importantly, they were my allies, they helped me dream, they believed in me, and they didn’t judge me.

That is the best advice I’ve ever had—the actions of the people who raised me up. And that distinction―actions rather than words alone―is critical. This holds especially true in today’s world, when we look around and see so much pain, animosity, racism, and despair. No one person can fix it all. But in our profession, we are blessed with privileges that allow us to make a difference. People do look to us for advice, for assistance. We can be leaders. We can advocate for those who need a voice. We can be inclusive of others’ views and cultures, and demand diversity in the workplace, before the courts, and in our world. Most important, we can take action by mentoring others each and every day. I’ll be the first to admit that on some days I fail. But as lawyers, as humans, we must keep trying and turn our privilege into action.