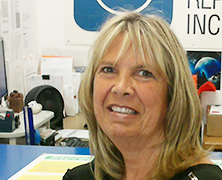 During the past 26 years, Rikki Gerson-Parry has been involved with some of Los Angeles’ most impressive construction projects.

As the CEO of Universal Reprographics Inc., she is an expert in document management for large scale construction projects. She has worked on some of the region’s largest undertakings, including The Getter Center, Los Angeles Metro, Los Angeles Community College District Campuses, as well as Westfields across America.

Gerson-Parry took over the family business in 1989, after her husband tragically passed. Over the years, she has successfully reinvented the company multiple times and ridden the ups and downs of the market to their present three locations across the Greater Los Angeles area.

Her ventures with the business started out as a young San Fernando Valley girl working as a clerk at the then Universal Blueprint and later evolving into various roles helping out the family business. “When my husband died I did not want to sell the company, I wanted to run it,” she said. At the time, she had two sons, ages one and four. “I never intended on working full time, I had worked in the accounting department part time to help the family business,” she said.

Gerson-Parry assumed the leadership role, devised a five-year plan and hired an interim president. “I needed to learn the business from a different angle. At the end of the five years, the first thing I had to do was let that president go. That was one of the hardest things I have done in my professional career,” she said. “I knew then, that I could do this.”

Over the years, she has continued to expand with the market and industry. She modernized the company’s offerings, both on the architectural side, where blue lines have transitioned to online plan rooms, and on the publishing side. The company now offers a wide range of commercial digital printing and scanning products and services designed to provide fast turnaround to the architectural, engineering and construction industries.

Her colleagues say she is innovating the printing industry and making ancillary moves as a ball of fire with everyone wanting to pass the torch. “Being a women in an industry that is dominated by men can be very intimidating if you let it be. I have found that as long as I am confident and believe in myself then no one can stop me,” she said.