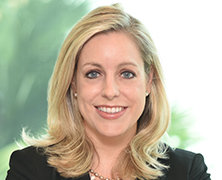 As a senior executive for a Fortune 500 company with about $30 billion in assets, Rebekah Biondo ensures alignment between Assurant’s business goals and its overall financial targets.

“There’s something extremely empowering about sitting across a table in a room full of men, and being the only woman participant when negotiating a multi-million dollar deal,” Biondo said.

She’s passionate about mentoring young women just beginning their own careers, and guiding them along their journey. Biondo believes the most important quality a woman leader should have is authenticity. “A leader who is genuine with her intentions and transparent in every day work decisions will be viewed as open and honest to others,” she said.

As part of her responsibilities as vice president of strategy and merger and acquisitions, Biondo recommends strategic enterprise initiatives involving Assurant’s capital deployment strategies for the company’s $5 billion portfolio as well as the organization’s M&A initiatives.

A credentialed actuary by trade, she’s held roles of increasing responsibility in the actuarial and finance functions at Assurant. Her financial acumen and leadership skills have resulted in a variety of accolades throughout her 16-years with the company.

Biondo’s colleagues say her work has been critical in Assurant’s business transformation. Her strong financial and leadership skills combined with an unrelenting commitment to her coworkers and community have amassed in great success. Biondo says she had realized early in her career the power numbers can bring to solving business problems. “Once I realized I had a strong ability to communicate technical financial details to our business teams, I knew I had a powerful set of skills and I was hooked,” Biondo said.

Outside of work, she’s made a lasting contribution to the South Florida community where she has worked tirelessly to raise awareness about autism. Her efforts to increase support for families living with autism have been recognized by the Autism Society of Miami-Dade County.

Biondo graduated with the highest distinction from The Pennsylvania State University with a bachelor’s degree in actuarial science and a minor in mathematics. She is a Fellow of the Casualty Actuarial Society and a member of the American Academy of Actuaries.