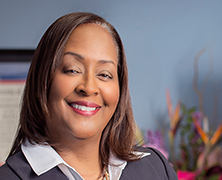 Over the past two decades, Phyllis Perrin Harris has earned a reputation for exemplary leadership. Her impressive career spans from public servant to legal counsel for the world’s largest company.

Harris is senior vice president and general counsel of Wal-Mart Stores, Inc. With revenue in excess of $482 billion, the retailer is the world’s largest company by revenue, according to the 2016 Fortune Global 500 list. With 2.3 million employees, the family-owned business is also the largest private employer in the world.

Harris serves as general counsel for  Walmart’s legal operations, where she counsels other lawyers overseeing the employment, intellectual property, and corporate governance functions. She also designs and executes outside counsel management, as well as diversity and attorney development programs.

Her colleagues say she sets high expectations and instills a belief in associates that anything is possible when diverse and inclusive teams work together toward common goals. They describe her as an authentic and supportive leader, who is sought out for mentorship and her ability to lead through change and difficult circumstances

Earlier in her career, Harris served as the first African-American regional counsel and deputy assistant administrator in the Office of Enforcement and Compliance Assurance at the U.S. Environmental Protection Agency. Harris advocated for justice, working on some of the most challenging environmental matters facing communities of color. She was awarded a Merit Rank Award from President George W. Bush for superior sustained performance.

Harris said her biggest career leap in the government was taking a position with the General Counsel.  “At the age of 34, the Washington D.C. based General Counsel asked me to take on the role of Regional Counsel in Atlanta for a legal department of 120. I was stunned because the office was in turmoil, I was eight months pregnant, and I did not think that I was ready,” she said. “I realized that I could not let my insecurities get in the way of the opportunity.  I got out of my own way, believed in the attributes that others saw in me and took charge!” She’s been nonstop ever since.

Harris left federal service in 2006 to join Walmart as vice president for environmental compliance, where she developed environmental programs recognized for excellence across the retail sector. She was promoted five years later to senior vice president and chief compliance officer for Walmart’s U.S. business units, where she designed innovative solutions that enhanced pharmacy, firearms, and money services’ compliance programs.

She took on her current role last year and quickly made and impact by using data and analytics to reduce expenses while improving supplier diversity for the company’s legal matters. She also launched the Walmart Ready conference to secure legal work for women and diverse attorneys and to prepare them for the demands of Walmart legal work.

Harris serves as vice chair of the Converse College Board of Trustees, the Environmental Law Institute, and Northwest Arkansas Headstart. She holds a BA in politics from Converse College and law degree from the University of Florida Levin College of Law.