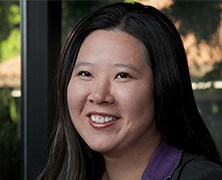 Be honest, be objective, be authentic, and smile.

Do cookbooks count? The Food of Taiwan by Cathy Erway

As a dutiful daughter, helping my parents at their dry cleaning business. Paid, teaching violin.

We have to get children of all backgrounds excited about STEM at an early age; it just requires a strong foundation. If you don’t enjoy science or math at least by high school, you’re not going to suddenly decide to major in engineering in college. And even if you did, it would be a huge challenge.

Exposing students to role models who look like them is an important step—the earlier the better. When I was growing up, my parents owned a dry cleaner and the only professionals I knew were their customers. I didn’t know what any of them did—just that they wore suits every day. So I went to college thinking I wanted to be an investment banker. I found my way over time, but I think it would have been easier if, as a child, I had known someone in STEM.

I encourage women to study STEM in college. You aren’t locked into being a scientist or engineer your entire life, and once you have a strong technical background, no one can ever take that away from you. The problem-solving skills you’ll gain in science or engineering will be really valuable in law or banking.

I grew up liking science, but never saw myself in the lab long term. I gave it a try, including a summer internship at a pharmaceutical company. And at MIT, I worked in a lab with a grad student who had a startup. But he explained that patent lawyers were really important to his business, which got me thinking about patent law. I think if you’re directly involved in a STEM field early on, it gives you some flexibility to either be a scientist or find an adjacent area that maybe doesn’t require a lab coat.

The fact that we’re even talking about it is a huge change. Technology is so central to our daily lives; I think that familiarity makes STEM much more prominent. Ironically, the pandemic has placed medical science front and center. It’s almost impossible to have a conversation without talking about vaccines right now. Last year everyone was hyper-aware of clinical trials and FDA approval timelines. We have incredibly effective vaccines in an amazingly short period of time—this simply wouldn’t have been possible even a few years ago. In some ways STEM seems more accessible than ever, not just to some brainiac scientist in a lab, but to all of us.