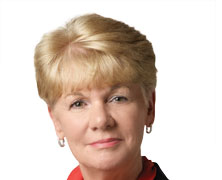 Always believe that you can accomplish your goals. Do the right thing, no matter what and never be afraid of challenges and hard work. Be yourself.

We are now at an interesting time in history.

Statistics indicate that women are now outpacing their male counterparts in achieving bachelor’s and advanced college degrees. However, fewer women are currently in executive leadership positions. Yet I do not believe that it has anything to do with the intelligence, motivation, success in education, or the willingness of women to pursue goals of attaining executive positions.

First off, we need to recognize the great strides that women have made in attaining leadership positions. We now see female CEOs and other executives in industries that have historically been male dominated. I firmly believe that similar to the significant increase in women earning degrees over the past several decades, we will see the trend in more women executives in the future.

As I consider some women who have attained executive success, I believe there are some common themes.

Education does not end with the achievement of a degree, rather it is a lifelong process of learning through personal and professional experiences. Females I know in leadership positions are open to new ideas and are willing to contribute to the thought leadership of their organization. They are clear in recognizing the need for others to be involved and operate in a collaborative style that is conducive to building a cohesive, functional team.

My advice to others who are beginning their careers or interested in an executive role is to use every opportunity as a learning experience. It is also to listen carefully (we often learn more from listening than talking) and develop a clear understanding of the culture of your work group and be prepared to take steps toward owning that culture. By owning the culture, we may create opportunities that evolve the culture into one that promotes “team” and is inclusive of new people and new ideas. The strength of a team setting and pursuing collective goals will lead to great things.
I don’t believe that being a female in today’s workplace is either a positive or a negative. Rather, I believe that the personal characteristics of each individual prepares them for success and roles within leadership. Although statistics indicate that women often continue to lag behind men in executive positions and compensation, we should never lose sight of the progress made over recent decades. We must all believe that goals can be accomplished, achievements require effort and commitment, and success lies within every individual.