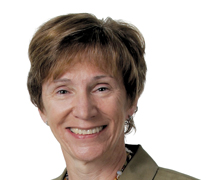 Depends on the day that you ask.

There are a number of people who taught me some important lessons that have helped shape my life and my career. The first was my father, who always said, “Work hard, tell the truth, and don’t borrow or lend money”—values I have always tried to incorporate in work and in life. He also said the three best careers for women were secretary, nurse, or teacher; he had a slight preference for teaching, because it provided child-friendly hours and summers free. Although I tried out all three roles at various points in my early career, I discovered that my father was dead wrong about careers, at least in my case. Coincidentally, four of my five daughters are teachers.

A second mentor was my advanced-biology teacher in high school, who worked his senior students like dogs, during a year when most other seniors were coasting toward the finish line. In addition to a rigorous class schedule and the usual homework assignments, we were assigned a series of “projects” during the year. These required us to put in extra hours before and after school and on the weekends, which we spent wading through streams, walking through fields being bitten by bugs, etc. He was unrelenting and unforgiving; we thought he was the most monstrous teacher ever encountered. What some of us eventually realized years later was that he had an incredible passion for his subject—a passion he wanted to instill in others. Although I had applied to colleges intending to major in English or languages, I ended up changing my major to biology. Ultimately, the college science background gave me a real advantage in the highly competitive market of Washington, D.C. law firms.

Another noteworthy mentor was the head of the practice group at the law firm where I spent eight years, prior to joining BD. He was, and is, a brilliant man who not only taught me a great deal about the law, but also forced me into public speaking, which I had expertly avoided until that time. He also taught me the value of motivating a team to achieve outstanding results, as well as the importance of political savvy.

Even when you work hard and do well, unless you understand the politics of an organization, career goals may elude you. I also learned the value of being able to make difficult decisions and take responsibility for seeing them implemented. While science has been an underlying theme throughout my career, the variety of jobs I’ve held have led me through several different fields of work, and I’ve learned something valuable from each of these experiences.