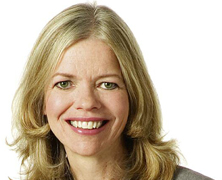 Look at data, use your intuition and make a decision. Don’t become paralyzed by data analysis or fear. If the data changes, then simply make a new decision.

The collection of Agatha Christie’s books

During a recent trip to China, I received an invitation to visit a local factory. My hosts explained that they wanted the factory’s several hundred female employees to observe and understand that U.S. women served in the executive ranks similar to their male counterparts. My hosts wanted the female factory workers to see that they, too, could have similar roles within their own organization.

To see an organization so fully committed to supporting its employees, regardless of their educational background or present career path, was deeply moving. It emphasized my belief that tomorrow’s corporate leaders first need to be enabled and encouraged.

I never intended to become an engineer, but after taking one computer science course I fell in love with it. Twenty-seven years later, I’m still doing what I love. Had it not been for that college course, I might never have discovered my passion.

At HP, we believe that education is the single most effective lever for increasing economic prosperity and growing a highly skilled work force. I currently serve on a variety of public committee boards and the Governor’s Science and
Technology Advisory Council for the state of Idaho, and I’m very interested in opportunities that expose children to new fields of study. It’s our responsibility, as current and aspiring business leaders, to support educational programs that enable young women to pursue careers in math, science and technology.

I also believe that as leaders, we garner our strongest results by encouraging team members to achieve their highest potential. As a female engineer and a working mother, I have always tried to impart the knowledge gained from my personal experiences to my team, whether it’s championing for flexible, family-friendly policies, actively recruiting women for engineering positions, or sharing successes and mistakes through mentoring programs with female employees. By knocking down walls, building up employees and reaching out with new ideas, technologies and humanity, all of us have the opportunity to influence and unlock the potential that exists within each other.