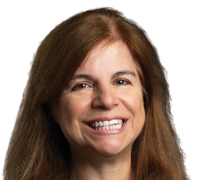 You need to be passionate about what you do.

The Girl Who Kicked the Hornet’s Nest, by Stieg Larsson

When I joined Kodak in Brazil after graduating from university, I was one of a community of engineers, but I was the only female. I always had to prove myself.

I never mapped my career in terms of particular jobs. Instead, I focused on results, recognition, and doing what I enjoyed. At the time, engineering was not a field that attracted many women. So I would hear people ask, “Is it really going to work? Does she have what it takes?” So I focused on persistence as I advanced from an engineer to a supervisor, and then to sensitizing manager at Kodak’s Brazil operation in 1999.

In that culture, there were no formal mentors, but my peers would come to my office to do a little informal coaching and counseling, even though we were all very competitive. I believe in developing oneself through interesting challenges and assignments. I’d been with Kodak for 19 years before someone asked if I needed a mentor. But, in fact, my peers were my mentors.

I work from a mindset that nothing really stops me. When I came to the U.S., my biggest challenge was to try to understand the culture. You learn to adapt and face challenges. That attitude worked well when I became a manager for Kodak’s large U.S. sensitizing operations. We were challenged to create an inclusive culture, and along with other managers from other regions, we applied our non-U.S. perspectives to help create a more inclusive environment.

Mentoring in our transforming environment led me to discover new approaches. I had to become an advocate. When we were ending production at a plant, I worked to enable people to transition to a next phase. For example, I knew one young engineer would do well on the business side, and when the local management didn’t see it, I called a manager with an opening in the U.S. and agreed to continue funding that person’s salary for six months. In time, she became a successful product manager in the new business.

Today I mentor many women at Kodak, both as a manager and as a sponsor via a Women of Color initiative. Whenever people ask me, I try to help both men and women understand how they can get other organizations to get “hooked” on their abilities.