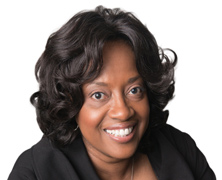 Work hard, play hard, and make a difference. Treat others as you wish to be treated. Don’t sweat the small stuff.

Eleven Rings: The Soul of Success, by Phil Jackson and Hugh Delehanty and Mom & Me & Mom, by Maya Angelou

Internship with IBM, my corporate sponsor, in a high-school college-bound program by Pepperdine University

My leadership journey began at home. As the firstborn, my mom placed the responsibility of being a role model on me. I was a curious child, a giver by nature, and a voracious reader with a vivid imagination. Preoccupied with what I wanted to do when I grew up, I became goal oriented and sought out opportunities to learn and participate early in life.

My first taste of formal leadership happened in the seventh grade when I became home room president. The role included a leadership class, which nurtured a spirit of service that has continued throughout my life. I continue to be engaged in philanthropy—often in leadership roles—and look for ways to serve colleagues and clients at work.

I believe that your attitude determines how much you will succeed. Success is relative and defined by you. I took that attitude with me into the corporate world, along with a belief in abundance. Over the years, a combination of hard work, willingness to take on new projects, and a history of strong execution has led to continuous growth with successive promotions.

Throughout my career, I have often taken on roles that were out of my comfort zone. I thrive on collaborating, building relationships, and working in teams, which all help me learn new things about myself. My journey has been exciting. I enjoy watching talent I’ve helped develop succeed, including seeing my daughter complete college.

Early on, I realized there were three things about me that could either be obstacles or advantages: my youthful appearance, being a woman, and being an African American. I chose to see them as advantages. As someone who was often the first in a role, I became skilled at asking difficult questions. I learned to listen and offer mutually beneficial situations, invest in myself, and know when to move on.

I gained tremendous wisdom from my colleagues and elders, who advised me to: “Know when to fold ‘em”; “Keep your finger on revenue as you climb”; “To thine own self be true”; and most notably, “The difference between success and failure is success got up one more time.”

Without support and my belief in abundance, I would just be surviving, rather than thriving, as I am today.

Education has and continues to feed my curiosity about business, people, and how they make choices. It has provided me with the tools to think critically that has led to a level of creativity, flexibility, and productivity that continues to propel my career.

Embrace yourself as a business. Seek to understand your business and keep yourself informed. Build your brand, stay relevant, and build your own board of directors/team to guide you and always ensure you bring value.