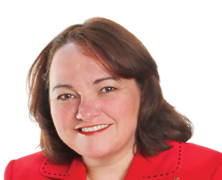 We came to the U.S. from Cuba when I was very young. We were dirt poor, so my Christmas gifts came from the Salvation Army or the thrift store. (To this day, I still have my first doll from the thrift store.) My mom worked two jobs almost all of my life. There was a time when we were on food stamps because she could barely make ends meet to take care of two kids. I know it was very hard on her, because she did not write or speak English. I learned it watching “Sesame Street” and going to the adult English classes at Columbus Hospital in Chicago (my grandfather was the janitor, and would take me to work with him after school. The teacher let me sit in her class until my aunt was finished with her cleaning shift; she would pick me up, and we would walk home).

While my grandfather did not read or write, he was an incredibly wise man who helped me to understand, very early on, that people have value—regardless of where they come from, what they do, or where they live.

I have been blessed to have many people in my life who served as formal or informal mentors. But the greatest mentor/teacher in my life, aside from my mom, was my grandfather because he taught me that, “short of death, there is no obstacle in life that you can’t overcome.”

At age seven, I came face-to-face with racism, when a teenage boy threw a rock at the window of our home because we were Hispanic. The glass broke where my brother and I were playing. My grandfather did not think twice about confronting the family of the boy, even though he didn’t speak their language, nor the language of the police. Fortunately, I spoke enough of both to translate.

Being bi-cultural over the years, I have seen, heard, and even personally had to confront, people whose behavior has been less than professional. Each time, those experiences have made me more determined to remove obstacles for others, and work at leveling the playing field regardless of race, gender, gender orientation, and/or ethnicity. To this day, the image of my grandfather standing up for what is right still resonates with me.

Prior to joining National Grid, I asked our leadership team some tough questions about their commitment to Inclusion & Diversity, because I wanted to make sure they were serious. Our executive team gets it, they are champions for inclusion and diversity, and they have a sincere commitment about doing the right thing by our employees. Having worked at various companies, and with many leaders, it is wonderful to be part of an organization that really values its people.