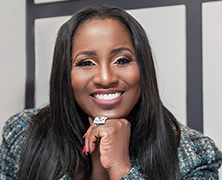 Go the extra mile, do more than what is required, and that is where the magic happens.

Driven By an Unshakable Belief That Everything is Possible

Nadine Spencer describes herself as “an adventure capitalist, making the most of life and all it has to offer.” Raised in Kingston, Jamaica, she lives in Toronto where she runs Brand EQ, a marketing and communications agency made up of top-level creative professionals, with international branches in New York and Kingston. As the former director and creator of the Food Network’s Delicious Food show, she is still an avid foodie in her spare time.

Nadine learned resilience and resourcefulness at an early age. When she was 12, her mother migrated to Canada, leaving her with a caretaker. One day, this caretaker took Nadine out of school and sent her to buy bammy (flatbread) several miles away. She gave Nadine only enough money for a one-way bus ticket, leaving her to figure out her own way home. When she arrived, Nadine devised a plan: she negotiated the price down, buying extra bammies which she promptly packaged and re-sold for profit at the opposite corner of the market. She made enough to buy lunch and make her way back home. This realization that she could create value was where Nadine’s journey as an entrepreneur began. She joined her mother in Toronto shortly thereafter.

A big picture visionary, Nadine is driven by an unshakable belief that everything is possible. As a results-driven leader and a lateral thinker of the de Bono school, she examines every angle of a given issue to find a creative solution.

Nadine is also a public speaker on everything from business to philanthropy. She is particularly passionate about helping women support each other. In 2016, her stand-out brand and heart for her community caught the attention of the Obama administration, who invited her to serve on the White House Special Advisory Committee on Women’s Issues and Marginalized Communities. Nadine has an extensive track record of philanthropic roles, including president of the Junior League of Toronto, and marketing director for Accelerating Women Entrepreneurs. She is currently the president of the Black Business and Professional Association, and recently began working with the Community Healing Network, a movement for mental health and emotional emancipation across the African Diaspora.

Nadine’s drive and work ethic show no signs of slowing down. As a mentor and a mother, it’s clear she’ll be supporting the ambitions of more women worth watching for many years to come.