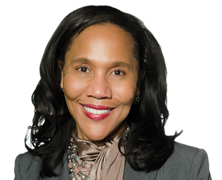 Aim for the sky; even if you fail you may land among the stars.

My first twenty-one years of my life were easy. I was the best in my class, held leadership positions in every organization that I joined in high school and college, and achieved every goal that I set to attain.

When I began interviewing for my first job after college, I was shocked and dismayed by how few off-campus follow-up interviews I was offered despite my grades, college achievements, and activities. I even had one recruiter from one of the major oil companies say to me, “Do not think that we are going to offer you a job because you are a black female.” I was twenty-one years old. While that confounded me, I was strong enough to reply that I expect to be hired because of what I can do and not what I am. Ultimately, he offered me a job but I declined. I wanted to start my career in public accounting with one of the Big 8 firms. Starting in industry, especially then, gave you a disadvantage, because the perception was that they hired the best out of college, gave them the best training, and then sent those that were not on partnership track out into industry to become managers and vice presidents.

Discouraged but not defeated, I started in industry at the largest company in the world at the time. However, after five years I felt that I had plateaued and my progress, if any, would be slow there. I left the oil company and landed a job with Global Marine, an offshore drilling company. The company was in the midst of bankruptcy and the five-person tax department was comprised almost entirely of new hires.

All I wanted was for someone to take a chance on me, so I decided to accept the job. Working for a smaller company, I was given the opportunity to take on as much work as I wanted and learn every aspect of the company. I managed to work in every area of tax—federal, state international, accounting for income tax, and technology. It was through that experience and daring to venture differently that has allowed me to perform at the level of senior vice president of Tax. When I left Global Marine, it was an $8 billion company and I was the vice president of Tax. The best decision I ever made was to take that chance.

My earliest role model, other than my mother, who is the epitome of strength and grace under fire, was Representative Barbara Jordon. I grew up in an era when women, let alone African American women, were not in positions of authority or power. I remember clearly seeing a feature article of her in Ebony magazine and watching her on television during the Nixon impeachment as she spoke with resonance and power, calling for the proceedings. I was inspired for the first time to dream of a career other than a teacher or nurse.