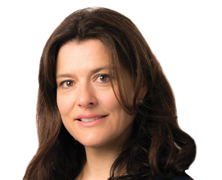 Never forget happiness on the path to success.

From the Holy Mountain, by William Dalrymple.

Data researcher at the European Commission.

My mother, a secondary school teacher, was one of the very few women of her generation to enjoy a professional career. My grandfather, whose economic means as a farmer in rural Spain were limited, had the courage and open-mindedness to invest what he could into his daughter’s education. My abiding memory of him is the advice he offered to all his granddaughters: study as hard as you can so that you can become economically independent. It is thanks to him that my belief in the rights of women to determine their own lives and careers is so important to me.

Having worked as an adviser for the European Union’s External Relations Commissioner for the Middle East and North Africa, I am acutely aware of the fact that in comparison to many women I lead a privileged life. Westerners forget that women in many countries still face horrendous abuses on an almost daily basis. In my job as a policy adviser, I raised awareness that violations of women rights are violations of human rights. Neither culture nor religion nor economic hardship can justify such violations—human rights are a basic principle that should apply equally to all without exceptions.

As a female partner at an international law firm, it is encouraging that things have changed greatly for the better for young female lawyers today. Even so, the profession is still male dominated at the senior level, and one which needs significant improvements for working mothers. A report in The Lawyer magazine last year revealed that women make up fewer than 10 percent of equity partners in the top one hundred U.K. law firms, although there was an equal divide on qualification. Firms that refuse to address this challenge are simply closing their doors to talent.

At Dechert, where I am the co-chair of the firm’s Women’s Committee, we are working to address the challenges faced by women in the law. We are conducting an overall review of our policies, from maternity leave benefits to paid childcare. There is a real momentum from many female (and male) lawyers who are contributing to make the firm better use—rather than lose—female talent.

The current secretary general of the European Commission, Catherine Day. Her commitment to work and wisdom are so impressive. I often find myself in difficult work situations wondering how she would have handled them.

I have never had an instance where I could clearly say that I have been discriminated against, but I have been involved in many work situations where I have been aware that others have unconsciously treated me differently because I am a woman. The only way to handle the situation without becoming resentful is to remind yourself that it is rarely ever personal.