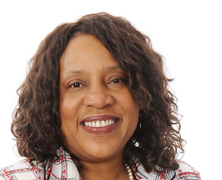 A Mercy, by Toni Morrison

Susan G. Komen for the Cure

Anyone looking at my resume and seeing that my undergraduate degree is in Music, applied voice from the Boston conservatory of Music, can be forgiven for scratching their head and wondering how—or why—I made banking my career. In fact, my passion for music theory manifests itself in other forms of “theory,” such as math and accounting. So although I had no interest in a career, and only applied for a teller position so I wouldn’t have to wear a “fast-food uniform” again, I unintentionally found my passion, and from day one wanted to learn more and more about banking. I believe there are skills that I have learned from the disciplines of music theory, practice, and performance that I use every day as a banker and as a leader—the least of which is sometimes breaking into song on conference calls!

Certainly, there are many important aspects to leadership, but one leadership accountability that is especially important to me is mentoring. A leader is only as successful as her team, and in addition to managing and motivating teammates, it is vitally important to help them learn, grow, and progress in their careers. Mentoring is a critical driver to increase diversity in the workplace. It plays a valuable role in the development of minorities and women for leadership positions, both of whom are seldom included in the “informal mentoring” that happens more naturally among white males.

Mentoring can open doors, and provide access and visibility that otherwise might take years for a diverse leader to achieve without an advocate in their corner. In addition, mentoring plays an important role in keeping diverse talent engaged and connected to a company and usually leads to a faster, more sustainable progression for the protégé.

Certainly, the number of women in the workplace has increased, but we continue to be under-represented in leadership positions. The proverbial glass ceiling is even harder to crack for people of color, so mentoring is an opportunity to address the dilemma of increasing the representation of women and people of color in senior leadership roles.

Mentoring is actually a two-way street and is mutually rewarding for both parties. It is a gratifying experience for the leader both personally and professionally. Along with helping someone else, I have learned new perspectives and ways of thinking by mentoring others, in addition to gaining a sense of personal satisfaction by helping someone else with their career development. As I think back through my twenty-five-year career in banking, the accomplishments I am most proud of are the ones achieved by the people I have mentored. To think that I have, in some way, played a part in their success—there is no greater reward.