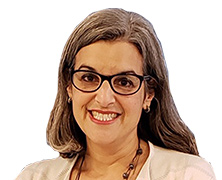 Keep perspective. Although I will admit I fail at this as often as I succeed!

The History of Love by Nicole Krauss

JVS Detroit, a human services agency that provides counseling, training and support services to people with disabilities, job seekers, seniors, and others in need

Powerful female role models are undeniably important because they provide the next generation with authentic examples of what is possible for women in the workforce. While women have made significant progress in the 25 years since I graduated from law school, for a number of reasons, including societal pressures, they still tend to gravitate toward certain disciplines and remain underrepresented in several industries, especially STEM and politics. While I am less frequently the only woman in the room today than I was at the start of my career, that situation still occurs. I am almost always still very much in the minority.

Many companies are making strides in the workplace by establishing mentor programs and women’s networking groups as a means to provide better solutions and support for female employees. However, these resources only fill part of a much larger need. Where women’s networks and mentoring groups tend to provide peer-to-peer support, or focus on what it is like to exist as a woman within a company, a powerful role model has the potential to prove how individuals—who just happen to be women—can succeed within an organization’s structure. The benefits of women’s groups are abundant and should not be diminished in any way, but I believe it is equally important to witness women functioning in leadership roles.

From my perspective, powerful female role models do remain difficult to come by, simply because they remain small in number. Despite the progress made over the past decades, a significant gender gap still exists in the talent pipeline. Studies show that women are less likely than men to be hired into manager-level jobs and even less likely to be promoted into them. This trend goes all the way to the top: as of May 2019, there are only 33 female CEOs in the Fortune 500 index. While this number is a record high, it only represents a tiny fraction of the group as a whole.

A recent report by McKinsey & Company found that women are less likely to aspire to be top executives than men, and are more likely to think their gender will make it harder for them to move forward. It’s my hope that the next generation of female leaders will not be held back by the same discouraging sentiments, and instead, will have the opportunity to turn to multiple female role models to help them succeed.