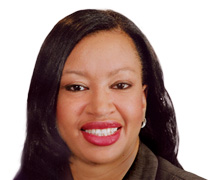 I try to not take myself too seriously and to enjoy every day. My children are really good at reminding me to do that.

I read recently that although women fill close to half of the jobs in the United States, we hold less than 25 percent of the jobs in STEM. The statistics for women of color are even more alarming. While I am happy in the legal field, I realize that when I was evaluating my career options, I never even considered a STEM career. I naturally gravitated towards a non-STEM career because I had no female role models who were scientists or engineers or mathematicians. I suspect that many women feel the same.

As a society, we tend to stereotype men in STEM roles, which is unfortunate because it has created a significant disparity between men and women in these fields. The lack of female role models and mentors in STEM careers is probably the most significant reason why women have either excluded themselves or have been discouraged to pursue such careers.

This is a perception that we need to change for the upcoming generations of women who will join the workforce. The demand for skilled STEM workers is directly linked to global competitiveness. Moreover, technology impacts so many areas of our lives and as the world changes, we, as women, must learn to adapt.

I try to encourage my own daughters to focus on math and the sciences so that their options are limitless. I show my enthusiasm when they come home with a good grade on a science project or math test because I think it is important for girls to take an interest in STEM courses. Our world is changing very rapidly and having an understanding of technology and the sciences will be very important to meeting the global challenges that women will face in the future. As role models and mothers, we need to narrow the gender gap by doing a better job of nurturing young women to become interested in STEM courses at an early age.

Mae Jemison, an African American woman astronaut, physician, and scientist perhaps said it best. “Never be limited by other people’s limited imaginations. If you adopt their attitudes, then the possibility won’t exist because you’ll have already shut it out. You can hear other people’s wisdom, but you’ve got to re-evaluate the world for yourself.”