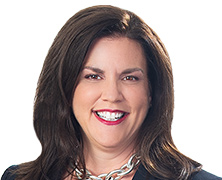 Embrace being the woman in the room.

I was fortunate to be born to my primary role model. Nothing in my mom’s resume would get her the job as a role model for a law firm partner. She had a high school diploma, married a ne’er-do-well, alcoholic husband, lived on a dirt road in a single-wide trailer, and necessarily sent her two kids to one of the smallest and academically lowest-ranked schools in the state. Yet, because of her leadership, her attitude and her work ethic, my brother and I did not know we were “disadvantaged.” We believed that we could do anything we chose to do with education, work, and grit—characteristics that she modeled.

Anyone who has mastered a particular issue can be a role model. For example, my mother could not model a successful business development plan. A different mentor was needed, and in my circumstances, that was a Caucasian male. That same male was not a good role model for finding a path for being a successful working mother; he didn’t have that skill set. It did not benefit me to ask my sponsor, who had been an equity partner for many years (and had the career to which I aspired) about the specifics of moving from associate to partner because the requirements and circumstances for that move had changed.

Role models are examples of best practices. The belief that one person can model the best practices for all issues, in a best-case scenario, limits the pool of examples; and in truth, likely doesn’t exist. Targeted thinking about objectives and goals, along with expanding thinking about people who have successfully achieved them, opens a new world of potential diverse and powerful role models.