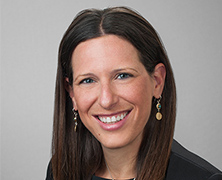 Travel, puzzling, and TV (Ozark and Succession are favorites, and I just cried my way through the final season of This is Us.)

You can’t control other people, but you can control your response.

Since I spend most of my day reading for work, I save my fun reading for vacation. I recently finished Educated by Tara Westover and have The Heart’s Invisible Furies by John Boyne uploaded for my next trip.

I worked at Häagen-Dazs in a New Jersey mall all through high school. I still make a really good milkshake.

Hospice of the Piedmont

I am part of an in-between generation of women. I didn’t have it as hard as those before me. But through my daughter’s eyes, I can see things are still not where they should be.

Let’s start with the good. Before rejoining Latham, I spent five years in the Solicitor General’s Office. Early in my tenure, a dinner brought together all of the women who had served in that Office. I arrived expecting to see a full room. There were three tables. As I sat down, I heard the other women compare numbers: “I was number three,” “I was number seven.” They asked my number, but I had no idea. These amazing women at the height of their careers knew how rare it was to be there. Having joined as one of several, I didn’t realize there was something to count.

That is progress. Fast forward many years. I’m back at Latham and walking my daughter to school. We are talking about the Supreme Court. (She is six, but stuck with a Supreme Court lawyer as a mom.) I excitingly tell her that three women now sit on the Court. Three! But how many men, she asked? (Okay, she said boys.) Six, I said. Her response: that’s not fair.

So how do we create more leaders? I don’t have all the answers, but here are two pieces of advice that helped me: (i) embrace discomfort, and (ii) say yes more than you say no.

I am not a natural public speaker—a strange confession from someone who chose to be an oral advocate for a living, but true. Standing at the podium terrified me. Yet I made myself say “yes” at the first oral argument opportunity—yes when I had a chance to apply to work in the SG’s office, where I would argue before the Supreme Court, and yes when Latham asked me to serve as the deputy managing partner of the DC office, which required me to speak publicly multiple times a week for four years.

The more you do something that makes you uncomfortable, the more comfortable you become. When you say yes, more doors open. More opportunities arise. It is those opportunities that will create the next generation of women leaders. And it is those leaders that will help my daughter grow up in a world she finds “fair”—a world in which we simply lose count.